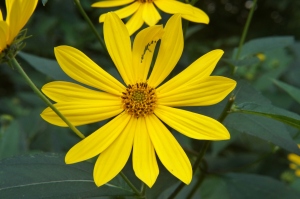 More on plants that influenced history.

JEERUSALEM ARTICHOKE; The plant that keeps on giving

Jerusalem Artichoke, which silently blankets one side of the Forty­Fort soccer field complex, is a plant with a rich history. Its edible tuber was dined on by Lewis & Clark on their 1805 expedition, prepared by a squaw. Exactly 200 years earlier, French explorer Samuel de Champlain found domestically grown plants at Cape Cod. He brought the plant back with him to France and by the mid­1600s, it had become a common vegetable for human consumption.

First cultivated by the indigenous peoples of the Americans, it is extremely nutritious because, unlike potatoes, its tuber contains no starch but a carbohydrate in a form that is metabolized into natural sugar.

Today, if you don’t feel like digging out the tubers, it’s available in health food stores and specialty markets. And it was chosen “best soup vegetable” at the 2002 Nice Festival for the Heritage of the French Cuisine.

And in a sign of the times, you can purchase “Freshly dug Jerusalem Artichokes, one pound or more,” for the low, low price of $5 on ebay.