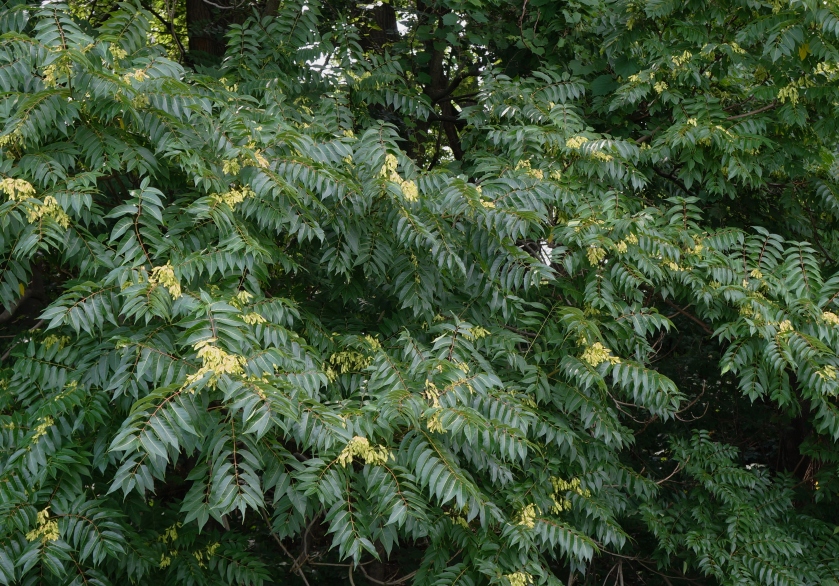 Starting today and for a few days, a look at some of our more unlikable invasives.

First, ailanthus, though honored for its central position in a “Tree Grows in Brooklyn,” is one of the worst invasives I’ve ever run across. It takes superhuman effort to kill it so it doesn’t keep coming back and it will grow in any conditions, no matter how horrid.

It’s like cockroach of the tree world. After the nuclear holocaust, they may be the only two entities remaining.

Having tried to stop one ailanthus from growing near my house, I can testify how hard it is to kill the Tree of Hell. It was called Tree of Heaven in its native China because it grew out of rocks on mountain heights where other trees would not grow.

It is notorious for its ability to grow in a hostile environment, from pavement cracks, to vacant urban lots to mounds of garbage. Its tenacity is such that in the best-selling “A Tree Grows in Brooklyn,” it is the symbol of a poor family’s hopes and aspirations.

It first reached the U.S. in Philadelphia in 1748, introduced by a gardener. Then nurseries on the East Coast sold it because it was pest free, grew quickly and, as we know all too well, will grow just about anywhere.

It’s so tenacious because it sends up many root sprouts, rapidly forming a dense colony and it releases chemicals from its roots that hinder the growth of other plants.

Eliminating it is difficult. It can also be dangerous. Its sap contains quassinoids, chemicals that have caused heart problems and blinding headaches in some people who don’t protect themselves from exposure when cutting or handling the trees, according to the Annals of Internal Medicine.