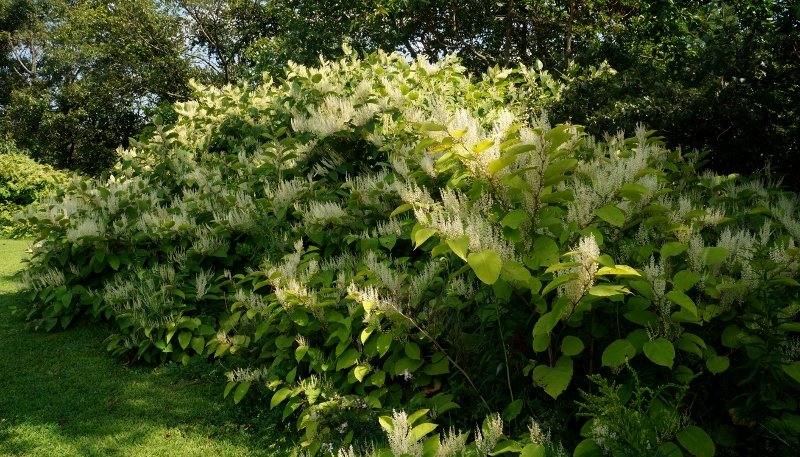 There’s a battle for the soul of a park in Wilkes-Barre – and we’re losing: Opinion

Ok, you tell me. Why this article on invasive plants in Wilkes-Barre Kirby’s Park is considered important enough that the Patriot-News in the state capitol ran the piece last year but NEITHER local paper would touch it.
I’ll reach out to them both again but don’t have a lot of faith in them suddenly becoming cooperative. Why they don’t want to expose this local problem is, I guess, way above my pay grade.
39 shares

You might not have noticed, but we’re at war. And the enemy is winning – and winning easily.

The battlefield, in this case, is the natural area in Wilkes-Barre’s Kirby Park, a sprawling riverbank oasis or, more accurately, a former oasis that’s now a green hell.

That’s because as far as the eye can see the land is being overrun and carpeted by two wildly aggressive invasive plants: Japanese Knotweed and Japanese Hop.

These two monsters have carpet-bombed the floodplain area, with endless stands of knotweed growing 10 feet or higher, and a green slug-like carpet of the hop, which covers anything and everything in its relentless path, denying space and sunlight to native plants it destroys in its mindless march.

This is a microcosm of the damage these two have done all along the Susquehanna River and, in the case of knotweed, to just about any natural spot in Pennsylvania, from the worst urban concrete ghetto to large grassland vistas.

Kirby Park is the strangled canary in the mine, a dire warning of what is happening and will apparently continue to grow worse, since so little attention, funding and political will is evident to fight it.

This week’s Plant Pick of the Week is a native perennial with spiky pinkish-lavender flowers called blazing star or gayfeather.

And this is the tiniest exposed tip of the iceberg.

According to the U.S Fish and Wildlife Service, “Although the numbers vary widely, some of the current research estimates that there are approximately 50,000 non-native species in the United States today. Of that, approximately 4,300 have been considered invasive species.”

“Invasive species have contributed directly to the decline of 42 percent of the threatened and endangered species in the United States. The annual cost to the United States economy is estimated at $120 billion a year, with over 100 million acres (an area roughly the size of California) suffering from invasive plant infestations,” researchers at the Nature Conservancy concluded.

But we’re looking at just two. How bad can two little plants be?

Worse than you can imagine.

Japanese knotweed was introduced to the U.S. from Japan as an ornamental in the late 1800s. It now can be found in the U.S. in 42 states, eight Canadian provinces and at least 36 European countries.

This weekend’s yard jobs include keeping the plants watered, helping the lawn make the most use of limited summer moisture, and dealing with those Japanese beetles that just started swarming again.

This is one very bad boy: It can grow through walls, tarmac and concrete and can grow by up to four inches a day during the summer. It is listed as one of the world’s 100 worst invasive species.

Mortgage lenders have even been known to refuse mortgages on properties which are affected by Japanese Knotweed.

And that can be deadly.

Newsweek reported on a case in England where a man “…killed his own wife, and then himself, on being told [wrongly, as it turned out] that knotweed from the next-door golf course was going to destroy the value of his house.”

Called the “Godzilla of weeds” by the Plant Conservation website, it is tremendously difficult to control, much less eradicate.

As Wallace Kaufman says in “Invasive Plants,” “Seedlings may be cut or pulled to exhaust the rhizome and kill the plants. This may take up to 10 years in a well-established stand.”

Japanese hop is just as bad. It can spread to cover large areas of open ground or low vegetation including understory shrubs and small trees.

Many thousands of hop plants per acre may be produced, eventually blanketing the land and vegetation.The vines grow rapidly during the summer, climbing up and over everything in their path and can form dense mats several feet deep, blocking light to plants underneath.

According to the National Park Service, hop vines twine around shrubs and trees causing them to break or fall over.

The sobering fact is that once these plants are well established it may be impossible to remove them. If they are removed, the cost is staggeringly high.

Researchers at Cornell University estimate that invasive species are costing Americans more than $130 billion every year.

It’s like climate change. Everyone (well, everyone with a functioning brain) agrees that the problem is serious, but beside some hand wringing and yet more studies, little is being done to address the problem.

What needs to be done? The public needs to get outraged and engaged, and start holding politicians’ feet to the fire. Only when the elected leaders – from the smallest borough with a street department to the EPA – realize that we want to reclaim our lands will anything be done.

But now, silence rules. The Kirby Park natural area is mostly used by the homeless and shelters and trash are strewn all about. Wilkes-Barre Police are supposed to patrol the area but only seem to show up sporadically after some violent incident.

“Regular” people are afraid to go there because the vegetation is so overwhelming it hides potential evil-doers.

So this invasive duo rules, winning the war more and more every day. And sadly, it’s a war that most people don’t even know is being fought.