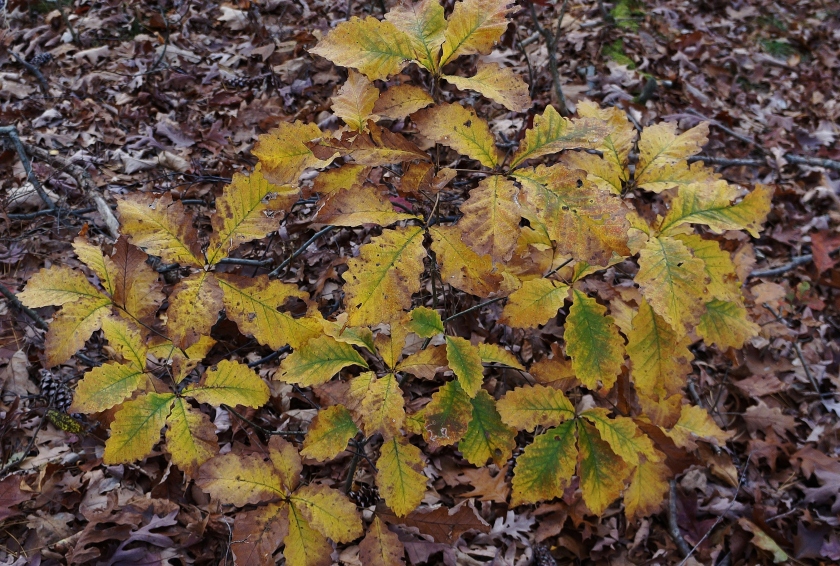 “At one time, chestnut was the most abundant large tree in the East, making up almost 25 percent of all hardwoods….By the 1950s, the chestnut had been virtually wiped out across the species range in what some ecologist termed ‘the greatest botanical disaster in history.’”—Charles Fergus, Trees of Pennsylvania

An estimated three to four billion chestnut trees across America were killed by Chestnut blight, an imported fungus that first showed up at the Bronx Zoo in 1904. It reached Pennsylvania about 1914, and spread through the entire chestnut range by 1940.

Saplings will still grow out of old stumps and may even get to the age when they bear a few chestnuts, but inevitably, like death, taxes and the Susquehanna flooding, the telltale orange smut of the fungus will inevitably do its evil work.

But hope is not lost. National organizations like the American Chestnut Foundation work hard at its goal “to restore the American chestnut tree to our eastern woodlands to benefit our environment, our wildlife, and our society.”

Locally, we have some very dedicated boots on the ground seeking the same goal.

Laboring mightily are a husband and wife who have been busy planting seedlings at Bear Creek Preserve — on Rabbit Lane on Route 115, 2.8 miles south of Bear Creek Village — and at Frances Walter Dam for several years.

The preserve is one of 42 that Natural Land Trust owns and manages in its efforts to preserve open space in eastern Pennsylvania and southern New Jersey.

The chestnut blight should fear a couple as accomplished as Michael and Kieu Manes of Landsdale.

Michael, 72, has a degree in mechanical engineering and has worked in that sphere and as an environmental engineer.

His wife, Kieu, 70, is a native of Vietnam and a retired computer programmer with a degree in computer science.

As befits these lovers of the outdoors and avid nature volunteers, they met on a hike in 1993 and were married in 1994.

“Whatever our origin may be, we both love the outdoors and enjoy studying the wonders that Mother Nature gives us,” Michael said. “We are also avid hikers, which blends in iPenn’s Woods.”

Their first effort to plant chestnuts came in 2013 at Mariton Wildlife Sanctuary in Easton, after it was hit hard by Hurricane Sandy. They discussed reforestation of the site with preserve manager Tim Burris and suggested planting American chestnuts and their mission was underway.

“Mariton, like Bear Creek Preserve, is run by the Natural Lands Trust and current Bear Creek Manager Joe Vinton once worked there,” Kieu said. “This led us to planting of chestnuts at other facilities We now have worked at seven different facilities planting chestnuts and on other projects for the The American Chestnut Foundation.”

They have been planting and monitoring American chestnuts at the Preserve since 2013 with the hope that their efforts will help to re-establish these once mighty trees in our forests.

“We planted 60 seeds at Bear Creek starting in 2014 and about 70 near Frances Walter Dam in 2015,” Michael said. “We have picked seeds from existing chestnut trees at four different locations. We have also found several wild American chestnuts at both of these two facilities.”

“On my last visit to the Preserve on June 7 to inspect our crop, the tallest tree is now four two inches in height,” Michael said.

Their interest in chestnuts started when they were doing volunteer work for the Appalachian Mountain Club.

“At one point, the AMC requested volunteers to work on a project of counting chestnut trees along the Appalachian Trail,” Kieu said. “We volunteered and became engrossed by our love for this tree and The American Chestnut Foundation.”

The couple noted that Bear Creek Preserve Manager Joe Vinton was responsible for getting them started at the Preserve and at the Dam.

“The Manes are terrific friends of our Preserve and, of course, of chestnuts,” Vinton said. “And we share the goal to re-establish these once mighty trees back into the forest for the benefit of wildlife. Nearly all wildlife love chestnuts. They are a high energy food source high in starch, sugar and low in fat. They produce nuts every year and most are huge producers.”

Vinton, 34, is a native of Waymart and still lives there. He started working for the Natural Lands Trust in 2005 and learned a variety of stewardship and restoration techniques and was actively engaged in projects such as the creation of new wetland areas, reintroduction of native grasslands and reforestation of former farm fields, he said.

“In 2010 I accepted the position of Bear Creek Preserve Manager and have been working here ever since.”

He noted that Bear Creek Preserve is a vast expanse of forests and steep stream valleys. The 3,412-acre preserve—larger than many state parks—provides critical habitat for a myriad of wildlife species, including black bear, coyote, and many migratory songbirds.

For more information on the Bear Creek Preserve, call 570-647-9175 or visit Natural Lands Trust website at www.natlands.com. The Preserve is also on Facebook.

One thought on “Fighting to restore the majestic American chestnut, one seedling at a time”